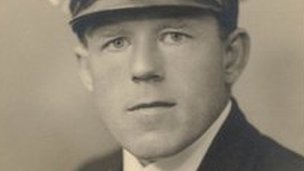 A last salute to the very last known combat veteran of World War I.

Claude Choules, who lied about his age to enlist in Britain’s Royal Navy, has died in Australia. He was 110.

Choules saw action in the North Sea on the HMS Revenge, where he later witnessed the surrender of the German fleet in November 1918. He remained in uniform until 1956, transferring to the Royal Australian Navy in 1926 and serving in World War II as a demolition and explosives expert.

To help us to remember, friends; that is the purpose of memorials. They stand as a constant reminder. The Waikiki War Memorial Natatorium was built by Hawai’i as a living memorial, one where families would gather to swim and play. It was built to remind us not only of more than 10,000 World War I soldiers, sailors and airmen from Hawai’i, but to remind us also of the liberty and values they fought to defend.

May Claude, Frank and their comrades-in-arms all rest in peace. And may we never forget.