Two military veterans and civic leaders this week joined the board of directors of the Friends of the Natatorium, taking on leadership roles in the fight to restore, renew and reopen the Waikiki War Memorial Natatorium.

The board elected Yvonne Geesey to fill the seat left empty by the recent death of longtime Natatorium supporter and veterans’ activist Fred Ballard. Maurice D. “Mo” Radke was chosen to fill the vacancy that is opening with the retirement of longtime board member and former President Lin Pang. (More later on Lin’s years of service to the Friends.) Geesey, who also replaces Ballard as secretary of the board, is a U.S. Army veteran and nurse practitioner who manages the Health Promotion Disease Prevention Program at VA Pacific Islands Health Care System. She is also an attorney, a member of the Hawai’i bar and a former litigator. Yvonne chairs the Elks Honolulu Lodge 616 National Veterans Service Committee and is an active waterwoman.

“I am interested in carrying on the service of my friend Fred Ballard and in preserving the Waikiki Natatorium as a memorial to the servicemen from Hawai`i who served in World War I,” Yvonne said.

Radke is a retired U.S. Navy command master chief and member of the PGA of America. He is owner of Golf Academy Hawai‘i and has served as PGA director of instruction at the Kāne‘ohe Klipper Golf Course since 2004. 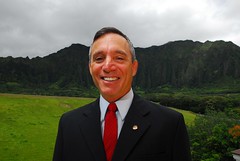 Mo also facilitates a three-day U.S. Labor Department Transition Assistance Seminar for separating service members, covering resume writing, job interviewing and skills assessment. He is 2011-2012 president of the Rotary Club of Waikīkī and volunteers with a variety of organizations.

“The War Memorial Natatorium means a great deal to me and ranks with the U.S.S. Arizona, U.S.S. Missouri and Punchbowl Memorial as important symbols of the notion of ‘service above self,’” Mo said. “The spirit of Hawai‘i’s volunteers in the ‘Great War’ is meant to be kept alive in this living memorial and swimming venue. I want to help preserve that spirit and help others to learn and remember it.”

Congratulations to Mo and Yvonne and mahalo to them both for their aloha and their willingness, as they once served our nation, to now serve this cause and the memory of Hawai’i’s veterans.

Come meet them at the 23rd annual Memorial Day Observance at the Natatorium at 10 a.m. on Sunday, May 29.

As a young boy, I spent many a day on the beach in front of the old canoe sheds at the Outrigger. Duke Kahanamoku was back on the beach with his pal Johnny Weismuller having both earned medals at the 1936 Olympics in Germany. The Natatorium is not only a tribute to the sacrifice of those who served in the war 100 years ago, it is a source of a great many good memories among Hawaii’s people.