The Granddaughter of the Natatorium's Builder Returns 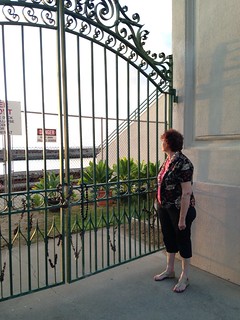 Knowing history is one thing. But seeing it, hearing it, talking with it is another thing entirely.

That’s why we were so thrilled and grateful to meet Marti King over Thanksgiving weekend.

Our Link to the Man Who Built the Natatorium

Marti is the granddaughter of John Llewellyn Cliff, the Honolulu contractor who built the War Memorial Natatorium. She was in Hawaii for the holiday and stopped by to see the Natatorium again and chat with members of the Friends of the Natatorium. She also presented a donation to help repair and reopen the facility that is so much a part of the story of her family and the story of so many Hawaii families. 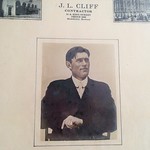 “My mother and her sister were born and raised here in Honolulu, and so she remembered the building of the Natatorium,” Marti said. “My mother remembered it being dedicated; she was only maybe 5 or 6. It was such a big thing in Hawaii.”

Marti’s mom, the young Helen Cliff, also swam, trained and competed in the facility in the years after that 1927 opening, Marti said.

“She was actually a champion swimmer and won medals, so I think it was probably her exposure to this kind of wonderful place to come and swim,” Marti said of her mother.

A Proud Daughter, a Proud Granddaughter

Marti, who lives in Oak Park, Calif., said that her mother Helen died in May at age 92. 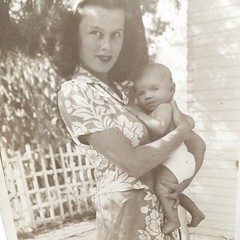 Marti at 3 months with her mom, Helen, a daughter of the contractor who built the Natatorium War Memorial. (Credit: Marti King)

“She was very proud of [the Natatorium] and so was her sister,” Marti said. “They always came back. … It was really hard for her when she couldn’t come to Hawaii anymore, because she loved to come here, loved the feel, the memories, and the atmosphere and the pride in what her father built.”

That pride remains strong in the ohana of John Llewellyn Cliff.

“I came here with a friend 15 years ago, and she cried,” Marti says. “She said, ‘Marti, what a wonderful heritage to have in your family.’ And that’s how we feel.

“I’m so happy that people care about it and are trying to preserve it,” she says.

Mahalo, Marti, for all that your family has done and for your continuing support for the Natatorium.

We know that – like Marti, like her late mother Helen and like her late grandfather John Llewellyn Cliff – you are proud of the War Memorial, its history and all that it stands for.

If you, too, want to support the Natatorium’s preservation and reopening, you can make a gift to the Friends of the Natatorium through PayPal by clicking the “Donate” button on the upper right of this page. To donate by check, see our “Contribute” page. Mahalo! 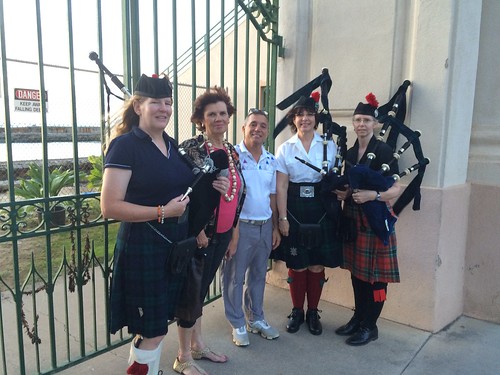 Marti King, second from left, with Friends of the Natatorium President Mo Radke and the wonderful volunteer bagpipers who play 'Taps' at the gates most Fridays at sunset. Thanks for visiting, Marti! (Credit: Donna L. Ching)

Would you like to see the plans that John Llewellyn Cliff used to build the Natatorium? Here they are, on the website of the Historic Hawaii Foundation. Cliff worked from an award-winning design by San Francisco architect Louis P. Hobart.

The idea that a city or a state should be allowed to demolish a memorial for the war dead is to me unbelievable.