Join Veterans for Veterans Day at the Natatorium

No more excuses. If you’ve always meant to join the VFW on Veterans Day to honor their comrades at arms, this is the year. 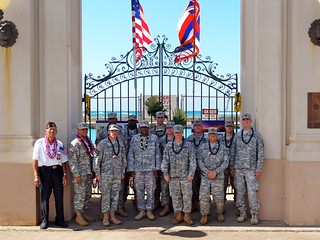 Why? Because Veterans of Foreign Wars Post 8616 annually holds its Veterans Day observance at the War Memorial Natatorium in Waikiki. Because that special place is Hawaii’s official World War I memorial. And because this year is the 100th anniversary of the start of that terrible global war.

It’s as simple as that. As important as that.

So please join the VFW at the Natatorium on Veterans Day — Tuesday, Nov. 11 — at 11 a.m. We – the Friends of the Natatorium – will be there for this 18th annual ceremony, along with the American Legion Post 17 Riders and other veterans groups.

The ceremony takes place in the park in the shadow of the Natatorium. VFW members will coordinate the presentation of 100 lei, each representing 100 of the more than 10,000 from Hawaii who volunteered for service in World War I. Poppies, the traditional symbol of World War I remembrance, will be distributed to all present, and a bugler will sound Taps. 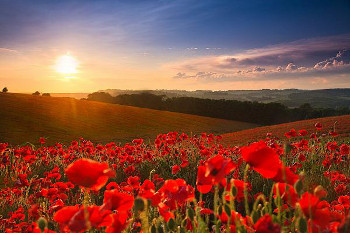 Poppies in the fields of Flanders in Belgium are an international symbol of World War I remembrance.

The Legion riders will roll in on their motorcycles shortly before the ceremony. The riders are members of the American Legion’s John R. Rowe Post 17, named for the first soldier from Hawaii killed in World War I.

Combatants from every major U.S. conflict since World War II will be present. There will be brief remarks honoring the service of soldiers, sailors, marines, airmen and coast guards throughout U.S. history, with special attention to those from Hawaii and those who served in World War I.

The keynote speaker is Norbert K. Enos, retired U.S. Army sergeant major, veteran of two combat tours in Vietnam and member of the National Council of the Veterans of Foreign Wars. He chaired the special commission that directed creation of the Vietnam Memorial on the grounds of the Hawaii State Capitol.

Also speaking will be Michael Soucie, a Gulf War veteran, senior vice commander of the American Legion, Department of Hawaii, and board member of Friends of the Natatorium. His remarks will be followed by the traditional World War I poem In Flanders Fields, read by David Bond, a pilot, Canadian veteran and countryman of the poem’s author, Canadian physician Lt. Col. John McCrae.

Iraq and Afghanistan veteran Lane Martin, the commander of VFW Post 970 and junior vice commander of the Veterans of Foreign Wars, Department of Hawaii, will present closing remarks.

The armistice that ended World War I’s carnage was signed Nov. 11, 1918, near Compiègne, France, and went into effect later that morning at what has become legendarily known as the “11th hour of the 11th day of the 11th month.” Originally commemorated as Armistice Day, the date is now known in the United States as Veterans Day, honoring former U.S. service members of all wars.

If you cannot be there at 11 a.m., stop by the Natatorium at any time on Nov. 11. Reflect and leave lei or flowers in honor of Veterans Day and the 10,000 World War I volunteers from Hawaii. The Natatorium is dedicated to every single one.

How to Get There

Never been to the Natatorium? A map and directions are available here.