Donna L. Ching, vice president of the Friends of the Natatorium, submitted this letter to the editor of the Honolulu Star-Advertiser marking today’s 85th anniversary of the opening of the Waikiki War Memorial Natatorium.

Eighty-five years ago, on Aug. 24, 1927, Duke Kahanamoku dove in to take the ceremonial first swim at the War Memorial Natatorium. In his wake came other Olympians, swimming celebrities and generations of keiki and kupuna swimmers. 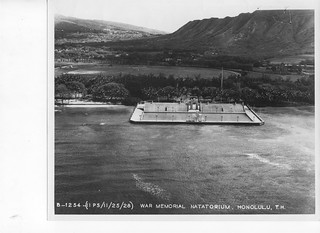 The Natatorium, a year after it opened

It was both special and sacred, our official memorial to more than 10,000 from Hawai’i who served – and many who died – in World War I.

Somehow, we let all this start to slip away. Somehow, the Natatorium deteriorated to the point where it had to be closed.

But it isn’t gone yet. It can still be saved. It can be great again. In fact, it can be even better than it was. We just need to work together to make it happen. Mahalo to Gov. Abercrombie for taking action to get things moving again.

I’m old enough to have swum at the Natatorium with my grandfather. I’m young enough to hope to swim there again. I’m optimistic enough to believe we will support the governor and do the right thing.