Many thanks to the many, many advocates for our War Memorial Natatorium who came out for last night’s public meeting!

As you can see from the photo (and only about a half of our overwhelming turnout made it into the picture), the pro-Natatorium crowd made an impressive showing in our bright yellow “Remember-Respect-Renew” T-shirts. 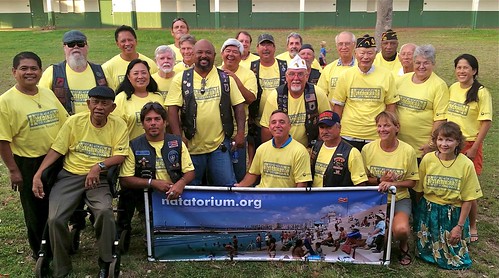 (The back of the shirts reads, “Save ‘em!” Note the logo of the National Trust for Historic Preservation on the left sleeves.)

Among those who came out were veterans, including high-ranking leaders of the VFW and American Legion. There were surfers. Historic preservationists. Swimmers and water polo players. Residents of neighborhoods near the Natatorium. And many others.

And there were many who couldn’t be with us in person who we know were there in spirit. (We heard from supporters as far away as Maine and Maryland!)

A very special “Mahalo!” to Betsy Merritt, deputy general counsel of the National Trust. Betsy (she’s in the front row, far right, of the group photo) flew out from NTHP headquarters in Washington, D.C., to join us and took an active and important role in the meeting. (A photo of her making a point is included in today’s Star-Advertiser coverage. Betsy was also quoted in coverage by KHON-TV.)

What the Meeting was About

Remember the purpose of the meeting: to define the scope of the city’s environmental impact study of alternative futures for the Natatorium. We were there to make sure that the study will be comprehensive and fair and adheres to all legal requirements. We were there to ensure that it gives a fair shake to the “repair and reopen” alternative.

Stunningly, in documents released so far, that’s not the city’s “preferred alternative.” The city, as things now stand, proposes to demolish the Natatorium. (Yes, believe it or not: Demolish the state’s official World War I memorial, just as we observe the centennial of World War I!)

Before the meeting, the Friends of the Natatorium, the NTHP and Historic Hawaii Foundation told the city’s planners – WCP Inc. – what we think the scope of the EIS should include.

Felix Martinez of Makiki, a veteran, says tearing down the Natatorium “would be an insult.” Star-Advertiser photo by Bruce Asato

Last night, our supporters raised other important questions, and the city’s planners took note: Will consideration of the “preferred alternative” take into account the fact that preservation is currently supported by organizations representing more than 2 million veterans and other constituencies nationwide? When can we expect updates to the inaccurate 2009 cost estimates and options the city is (still) using? What is the time frame for moving forward?

Additional concerns and questions can be submitted to WCP until Aug. 23. That date will mark the close of a 30-day period following the July 23 issuance of a formal public notice on the EIS process. According to WCP, the draft environmental impact study is not expected to become public until spring 2015 or later.

Please stay in touch with us – through our website and on Facebook and Twitter — so you will know when and how to be involved. More information and details on how to participate in the EIS process will be coming soon!

There are lots of things you can do to help. One of them is to keep the Natatorium issue in the public eye by proudly wearing our T-shirt, very similar to the ones we wore last night. Our friends at ‘Ōiwi Ocean Gear make a donation to Friends of the Natatorium for every shirt sold!

I used to swim at the Natatorium a lot as a kid, and I would like to take my son swimming there someday. It’s a pretty cool place with a ton of history. We need to save it.