Guest post: Reflections on "The Eddie" and the Natatorium

The sun was up. The crowd was up. Most important, the surf was up.

One of the world’s most compelling competitions – a surfing contest that organizers refuse to run unless the waves are massive enough to scare the boardshorts off of Neptune – was on. For only the eighth time in 25 tries.

That’s the mystique of the Quiksilver in Memory of Eddie Aikau. A superhuman challenge, one dedicated to the memory of a superhero who “would go” in the face of nearly anything the sea could stir up? Something like that can’t be held on a day when Waimea Bay is anything less than a four-headed, fire-spitting, flesh-rending merciless monster. It just can’t.

I saw it all over the Internet Tuesday. From 5,000 miles away, I was amazed at the power of the sea, the skill of the athletes, the respect of everyone in the water and on the shore for what they were doing and witnessing.

And it occurred to me that, while this competition is amazing and unusual and one of a kind, it is also in an important way typical of what I have come to know of Hawai’i. You all live in a place with a sacred past and a culture that values that sacredness. You live in a place and a culture that reverences the people and the places that are important to who you are and what you have become.

And so it continues to mystify me: Why – given this reverence for history, for culture, for inspirational people; given this special sense of place and purpose – why is there any question at all in Hawai’i about preserving and restoring the Natatorium?

Dennis O’Shea
A Friend of the Natatorium
Baltimore 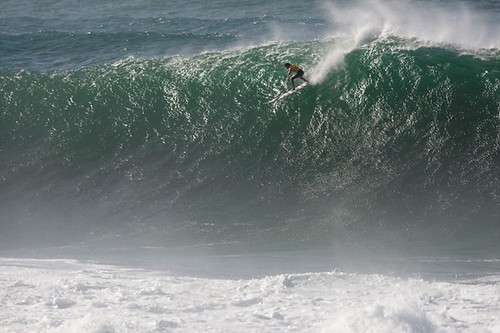 Greg Long on his way to winning the 2009 Quiksilver In Memory of Eddie Aikau (Photo courtesy of Surfglassy).