Honolulu’s NBC affiliate KHNL-TV will premiere The Tank, a one-hour documentary on the Waikiki’s War Memorial Natatorium, this Sunday, Nov. 8, at 7 p.m.

The Tank premiere falls three days before Veterans Day. The holiday was created in 1919 to mark the first anniversary of the 1918 Armistice ending World War I. The Natatorium is the official memorial to Hawaii’s veterans of that conflict. 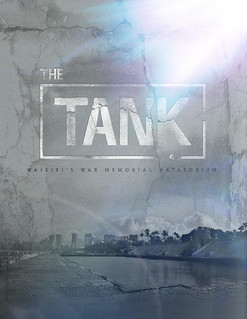 What ‘The Tank’ is About

In The Tank, the filmmakers at Oahu’s TalkStory Productions have completed a herculean task: compressing nearly 100 years of Natatorium history and over 40 hours of footage into a one-hour prime time slot.

“We begin with the Great War and the genesis of plans shortly after the Armistice to honor more than 10,000 Hawaii veterans with a unique ‘living memorial,’” says producer/director Jason Lau, “and then go on to tell the story up to the current day.”

“Our aim,” Lau says, “was to capture the storied history of Hawaii’s World War I monument – as a memorial, a venue for global aquatic competition, and a hangout place for kama’aina – before the Waikiki site’s fame and importance fade from collective memory.“

The general manager of Hawaii News Now, Rick Blangiardi, says he has always believed that airing heritage projects like The Tank on one of his channels is important.

“This iconic Waikiki landmark is part of our collective community memory,” Blangiardi says. “The filmmakers have undertaken a very demanding, but important, storytelling task. Hawaii New Now is proud to support them and play a part in preserving Hawaii’s history and honoring our veterans.”

What You’ll See on Sunday

The film gives the under 40-crowd (those too young to have memories of swimming at the Natatorium) a peek behind gates that have been locked since 1979. Meanwhile, viewers in the kupuna cohort will relive their small-kid-days on the high dive and slide and recall the international swimming stars who trained and competed in the Natatorium, for decades known locally as “the Tank.”

Behind the scenes at the filming of ‘The Tank’ from Jason Lau on Vimeo.

The documentary also addresses the current state of the memorial and what the Tank’s future might be.

How ‘The Tank’ Happened

The film came to be when executive producer Donna L. Ching approached three of her Punahou School classmates at TalkStory Productions – John Ching and husband and wife Jason and Debbie Lau – asking for help in sharing the Natatorium story “before everyone who remembers anything about the place dies.”

Donna’s sense of an urgent need to record the history of the Nattorium had grown with the deaths of people prominent in that history, people such as champion swimmers Keo Nakama, Halo Hirose and Bill Smith; Hall of Fame Coach Soichi Sakamoto; and Natatorium superintendent Walter Napoleon. Jason, Debbie and John enthusiastically agreed to take the project on pro bono, as a public service.

Kicking Off the World War I Centennial

The Tank also serves as a launch pad for efforts over the next several years to bring attention to Hawaii’s role nearly a century ago in World War I, a role the territory embraced decades before statehood. Hawaii’s Centennial Commission Committee hopes to engage educators and the general public in its efforts to remember and honor Hawaii’s World War I history.

As a kid growing up on Oahu in the 60s and 70s, we would spend countless hours swimming in and clambering around the memorial.