The Natatorium: For the Weight Ohana, It’s Personal (See the Video)

The Weight/Napoleon ohana cares so much about the War Memorial Natatorium, for so many reasons.

— Their ancestor, Sam Kainoa, who died in the service in World War I, is among the 10,000 volunteers from Hawaii honored at the Natatorium.

–Another forebearer, Walter Napoleon, was superintendent at the Tank and captain of Hawaii lifeguards.

–The family’s matriarch, Naomi Weight, daughter of Walter, practically grew up at the Natatorium on the shore of Waikiki, as did so many Oahu residents for generations.

So you’ll see dozens of members of this great ohana at the Natatorium each year for the Memorial Day observance. And you’ll find this family at the center of the fight to preserve, repair and reopen the Natatorium, Hawaii’s official World War I memorial.

Freelance military and war reporter Alex Quade came to Hawaii this past Memorial Day to talk with members of the Weight ohana, and to others involved in the fight for the War Memorial Natatorium. Her video story has just been released online by the Daily Caller. 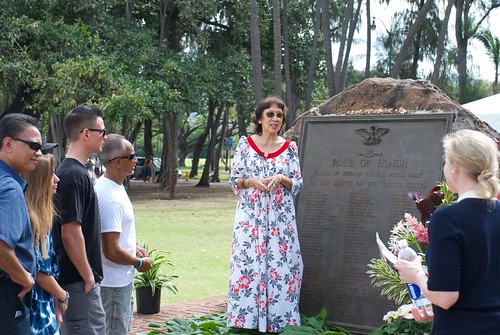 Alex’s story captures beautifully what Naomi Weight and her family are all about, and why they fight for their state of Hawaii to do the right thing.

As Naomi’s son, Frank, a director of the Friends of the Natatorium, says: “Memorials are built to keep memories alive. We don’t want to be the first state to ever tear down or demolish a [World War I] memorial.”

Mahalo to the Weight/Napoleon ohana for their dedication to our shared past. And mahalo to Alex Quade for putting their story on video and getting it out to the world.

I grew up in Honolulu seeing the Natatorium every day and abhor the thought of yet another historic icon falling victim to so-called progress.