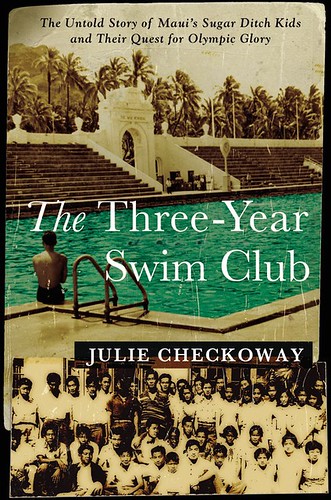 The Natatorium is important not just because it’s an official state war memorial, because of its architectural significance, or because of its unique place in local history and culture.

It’s also important because of the people who have swum there.

In just a few days, a new book is coming out about some of those people, a fascinating group of youngsters from Maui known as “The Three-Year Swim Club.”

Julie Checkoway’s book of that name tells the story of Maui public school teacher Soichi Sakamoto and the impoverished Depression-era sugar plantation kids he coached, at first in an irrigation ditch because there was no pool available. This amazing man and his amazing athletes astonished the world, winning national and international titles, and breaking world records. Eventually – after the Olympic hiatus during World War II – some of Sakamoto’s swimmers even took Olympic gold. 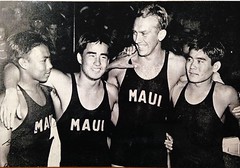 The Swim Club and the Tank

As Checkoway writes a little farther on in that chapter:

There was, in fact, no other pool in history like the Nat. The tank was gargantuan, double the size of an Olympic venue—100 meters long and 40 feet wide, and it had cleverly been equipped with adjustable pontoons, so it was in that sense also the most ambitious swimming pool ever constructed: it could accommodate both American-style meets, which were measured in yards, and also European and Olympic ones, marked in meters. It was meant to become a draw for swimmers around the world who would compete with the generation of Hawaiian swim champions who were certain, from that vantage point in time, to come.

Its use was to be in the glorious future, but its purpose was also to serve as a permanent remembrance of the past. It was dedicated not to swimming heroes but to heroes who had devoted themselves to the American and European cause, a kind of living memorial to any Hawaiian who had risked life and limb in the Great War.

The Three-Year Swim Club is already getting great reviews, from outlets like Shelf Awareness and the influential Kirkus Review. Author Julie Checkoway has been interviewed on C-SPAN.

The official publication date is Oct. 27, and we’re told the book will be available in stores throughout Hawaii and around the country. If you can’t wait, you can order a hard cover, e-book or audio book right now from Amazon or from Barnes and Noble, which has made The Three-Year Swim Club one of its “Discover Great New Writers” picks.

If you’d like an autographed copy, that can be arranged through The King’s English Bookshop in Salt Lake City, where Checkoway lives.

Some of my fondest memories are of swimming at the Waikiki Natatorium.