Veteran, VA manager and longtime veteran advocate Michael C. Soucie Sr. has been elected to the board of directors of the Friends of the Natatorium.

Michael, who retired as a chief petty officer after 22 years in the Navy, returned to civilian life as a case manager and clinical supervisor in Kalaeloa for the United States Veterans Initiative, or U.S.VETS, the largest provider of services to homeless veterans in the country. 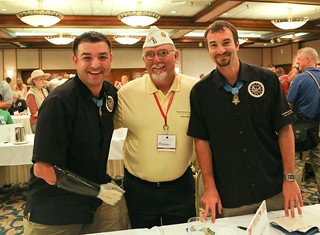 He has since moved to the Department of Veterans Affairs, assisting veterans struggling with mental illness with their return to gainful employment. Michael now oversees all work therapy programs for the VA in Hawaii and on Guam.

Michael has been an active member of the American Legion in Hawaii for seven years and is District One vice commander for the Department of Hawaii. He chairs the department’s Veterans Affairs and Rehabilitation Commission and its committees on Veterans Preference and Employment and Economics. He has also served as both a post commander and assistant director of the American Legion Riders Chapter 17 in Hawaii.

He holds a bachelor’s degree in behavioral science and a master’s in counseling and psychology from Chaminade University of Honolulu.

Michael has dedicated countless hours to advocating for veterans through his affiliations with the American Legion, Elks, Oahu Veterans Council and, most recently, the Friends of the Natatorium. “It is my honor to work with such a dedicated group of veterans advocates on the necessary and noble cause of the restoration of a monument to our nation’s World War I heroes,” he says.

The Friends of the Natatorium is a 501(c)(3) organization that has advocated for more than 25 years for the preservation, restoration and return to active recreational use of the Waikiki War Memorial Natatorium. The Natatorium opened in 1927 as the official monument to the more than 10,000 men and women from Hawai’i who served in the Great War.