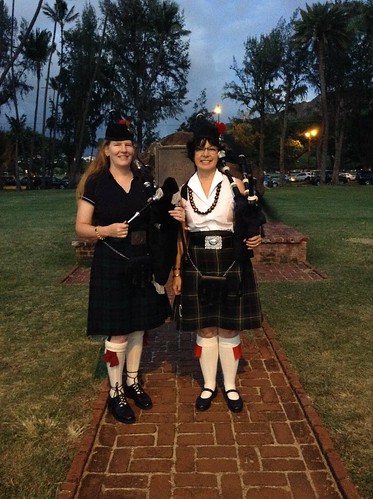 Our bagpipe contingent is up to three! Last December, piper Kim Greeley began playing at the War Memorial Natatorium every Friday at sunset.

She volunteered for the gig – playing tunes like Coming Home and Amazing Grace before sounding Taps – as her weekly tribute to the 10,000 World War I servicemen and women from Hawaii whose memories are enshrined at the Natatorium.

On Friday, Oct. 2, it got even better. Beachgoers and passersby were treated to the playing of a special guest artist: trumpet virtuoso Fred Radke. Fred, who brought his Harry James Orchestra out from the mainland two years ago to play a special benefit gig for the Friends of the Natatorium, was on a return visit to Oahu. He graciously stopped by, joined Kim and Theresa, and blew a soulful Taps. [Watch below or click here to listen in.]

Fred, besides being renowned among contemporary Big Band performers and a well-known jazz teacher, is a military historian with tremendous pride in and respect for our War Memorial Natatorium.

Come and Hear for Yourself

Mahalo to all these dedicated musicians for their kokua. Their selfless contribution of time and talent is especially appropriate now, as the world observes the centennial of World War I, the so-called “War to End All Wars.” War did not end, to our everlasting regret, but the sacrifices of those who fought and those who died should never be forgotten.

How about it? Come down to the Natatorium to witness a brief but moving ceremony of honor, most any Friday around sunset.