Natatorium friend Noe Bell tells us that this lifeguard photo was taken on June 26, 1942. Noe’s father, Hiram N. Goldstein, is the handsome gentleman on the left in the back row, standing on the wall. 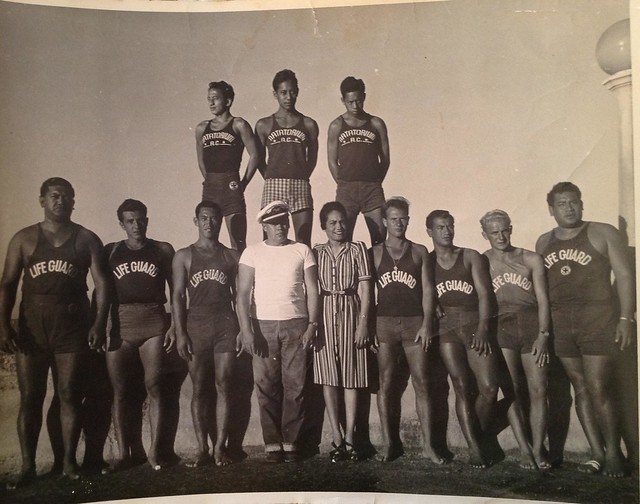 Who’s who in this photo? Tell us in the comments!

We know a couple of the other folks in the picture: The beloved Walter Napoleon is in the middle of the front row in jeans, T-shirt and a cap. He was superintendent of the Waikiki War Memorial Natatorium and of the territorial beaches and also captain of the territorial lifeguards.

Standing next to Walter, the only woman in the photo is Nana Veary. She was matron of the Natatorium and Mr. Napoleon’s secretary. Mrs. Veary became a noted Hawaiian spiritual teacher and author of Change We Must: My Spiritual Journey. She was also the mother of Hawaii Music Hall of Fame singer Emma Veary.

Miguel Baez conferred with retired lifeguard, Clifford Chillingsworth who pointed out that to Nana Veary’s right is Tommy Zahn and in the front row, far left is Steven Kauwili.

Another retired lifeguard, Ralph Wallwork, wrote to us to say that next to Tommy Zahn is “Ah Fook” Walter Ah Mow, Sr. and that agile-looking young man in the back row on the right side is David Kaleikini. Ralph recalls that David also worked as the coconut tree climber in the Kodak Hula Show.

Brandon Valdez’s research suggested that the really big fella on the far right of the front row is Beachboy, William “Ox” Keaulana.

Mystery Lifeguards of the Natatorium

Other than that, we don’t know much about the photo. Naomi Napoleon Weight, daughter of Walter Napoleon, remembers that the lifeguard third from right in the front row was named George Laikupu.

Help Us Identify the Mystery Lifeguards

But keep the comments coming! We sure would like to identify more people! If you think you know any of the lifeguards or have any other clues about the photo, post a comment or let us know at .

And we’d love to see your old Natatorium photos or hear your stories about what was and what could be again. Mahalo!