A memorial service will be held this Saturday, April 12, for one of the Friends of the Natatorium’s first members and most dedicated activists, Ron Yasui. Ron died March 15 at age 78. 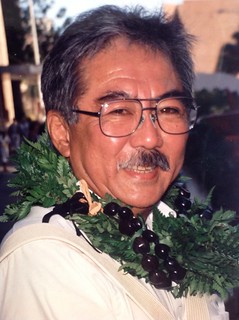 A 1953 St Louis School graduate, Ronald Hiroshi Yasui joined the Marine Corps after high school and served in combat during the Korean War. After the war, he had a long career as an air traffic controller for the Federal Aviation Administration.

“Ron was a gung-ho Marine and always for the underdog,” his younger brother Byron recalls. “He was that kind of guy.”

Ron channeled that passionate support for underdogs into action, standing up for the honor and dignity of fellow veterans, including all those honored at the Waikiki War Memorial Natatorium.

He poured decades of personal energy into the work of the Friends of the Natatorium.

How Ron Got Involved

Joan Sheeran Apo, the first executive director of the Friends, met Ron about 1970. They were both among a “huge group of people” who frequented the Natatorium volleyball courts and the adjacent beach and park, she said, and they became lifelong friends. 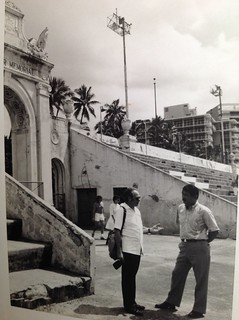 Ron is on the right in this undated family photo, taken inside the walls of the War Memorial Natatorium.

When the Friends were founded in 1986 and Joan organized a concert to promote awareness of the Natatorium issue, Ron attended and said, “Joan, I want to help you in a serious way,” she recalls.

“Ronnie and I, we were chosen to do public speaking engagements … and … work on ‘educating’ the legislature,” Joan says. “We went to the legislature every single [week]day from about 4:30 until about 8:30 at night for about five months.

“It was an amazing experience,” she says. “We learned so much.” And they accomplished a lot. Joan’s husband, Peter Apo, who later became president of the Friends, recalls that Ron and Joan “haunted the halls of the legislature and helped to secure $1.8 million in state funds to kick start the planning and design for the full restoration of the Natatorium.”

Whether it was lobbying, attending planning meetings, helping out at events, or writing letters to politicians, Ron could be counted on for ardent advocacy. He was determined always to win dignified remembrance of our war dead; honor for our veterans; and restoration for the Natatorium, Hawai’i’s official World War I memorial. It hasn’t happened yet, but that is decidedly not for lack of commitment and perseverance by Ron Yasui.

“Ron’s dedication, which helped ‘pave the path’ towards full restoration of our War Memorial Natatorium, will embrace us forever with gratitude and aloha for his years of commitment with the Friends of the Natatorium,” says FoN board member Frank Weight, grandson of final Natatorium superintendent Walter Napoleon and of Kay Napoleon. “A hui hou, my friend,” Frank adds.

Ron was a lifetime member of the Elks Club and an active volunteer for the Episcopal Church and St. Andrews Cathedral.

He is survived by two younger brothers, Alvin (Jane) and Byron; by three sons Kerry, Keith (Ruthie), and Kevin (Jo Ann); and by two daughters, Ronnie Lynn (Kendall) Lemn and Rachel. He had eight grandchildren and two great-grandchildren.

A memorial service will be held Saturday at Nuuanu Memorial Park and Mortuary. Visitation is at 4 p.m. and the service at 5 p.m.

Aloha, Ron, and mahalo for all you did to restore life to the Natatorium and dignity to those it honors. We continue your fight.

Some of my fondest memories are of swimming at the Waikiki Natatorium.